The NO War shirt returns to the Turina Stadium 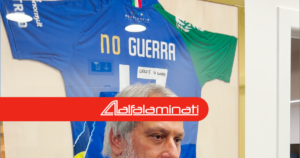 After winning the No War shirt auctioned to support Ukraine, our Angelo Medici gifts it to the Turina Stadium. Find out more.

It has been 8 months since March 14 when the forward Simone Guerra playing for Feralpi Salò decided to wear a special shirt to show the support of the entire team against the war in Ukraine.

That number 17 NO War shirt, which had brought luck with a 3-0 win by the Leoni del Garda against Triestina, was auctioned a few days after the match during a fundraiser event specifically for the Ukrainian population affected by the war. It was won by our CEO, Angelo Medici, who has always been a sponsor of the team from Salò and a supporter of sports and social projects on the territory.

An heirloom shirt that will remain at the Turina Stadium

Last Saturday, 12 November 2022, the Leoni del Garda once again walked onto their home pitch, this time to play against Lecco, and Angelo Medici took the opportunity to return the NO War shirt to the Turina Stadium and leave it as a heirloom for future generations.

Our CEO believes it is essential to raise awareness among fans and players concerning the delicate political situation we are experiencing in Europe, and the idea of returning the NO War shirt to Feralpi Salò is intended to be a concrete symbol of how sport can convey healthy values of cooperation and collaboration.

A choice that, once again, demonstrates Angelo Medici’s affection for the territory, pushing the boundaries of profits and purely economic motivations whilst making a tangible contribution to the market and society of tomorrow.

Do you want to know more about our social and sporting commitments?