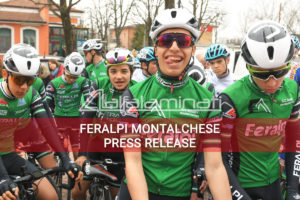 FERALPI MONTECLARENSE. VENETO AWAITS THE JUNIORS, THE YOUNGSTERS ARE READY TO MAKE THEIR DEBUT

The Feralpi Monteclarense inaugurates April with a race away from home in Veneto. The Junior Team will be racing in Santa Lucia in Pescantina (VR) (the Salumificio Pavoncelli Grand Prix) that will take place on Sunday 7 April starting at 9.30. The team coach Tiziano Gozio will be at the start with the whole team hoping for a good result.

The Beginners and the Students, on the other hand, will be racing in Lodetto di Rovato (BS): the Gran delle Frazioni (at 2 p.m.) and the Don Giuseppe Trophy (9 a.m.). The objective of the two teams managed by Pietro Bregoli, Manuele Bregoli and Carlo Maffezzoni, will be to manage the race cleverly, without being caught out by breakaways, and putting the sprinters in the best conditions to win.

The Giovanissimi managed by Claudio Pagnoni will make their debut in Nuvolera (BS). The large Feralpi Monteclarense team will in fact be racing in the Nuvolera Town-Aldo Facchetti Memorial Trophy starting at 2 p.m. in Via Venanzio Filippini.